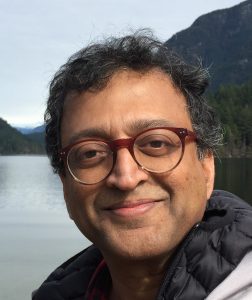 Dinesh K. Pai is a Professor and Tier 1 Canada Research Chair in the Department of Computer Science at the University of British Columbia, where he directs the Sensorimotor Systems Laboratory. He is also a member of UBC’s Institute for Computing, Information and Cognitive Systems (ICICS), the Institute of Applied Mathematics, the Graduate Program in Neuroscience, the ICORD International Collaboration on Repair Discoveries, and the Brain Research Centre. He received his Ph.D. from Cornell University, Ithaca, NY, and his B.Tech. degree from the Indian Institute of Technology, Madras. Pai has received several awards, including UBC’s 2012 Killam Research Prize.

His current research is focused on sensorimotor computation in computer graphics, robotics, and neurobiology. His research led to the UBC spinoff company Vital Mechanics which is building advanced computational models of the human body, including the skin and soft tissues. Pai’s interdisciplinary activities at UBC have been supported by several significant research grants, including NSERC Discovery and Idea-to-Innovation grants, a Major Thematic Grant from the Peter Wall Institute for Advanced Studies, and a Program Grant from the Human Frontier Science Program for studying modularity in the central nervous system. He also leads the Human Sensorimotor Systems theme within ICICS.