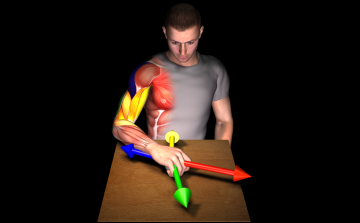 Human motor skills are remarkably complex because they require coordinating many muscles acting on many joints. A widely held, but controversial, hypothesis in neuroscience is that the nervous system simplifies learning and control using a modular architecture, based on modules called synergies. Previous evidence for modularity had been indirect, based on statistical regularities in the motor commands. In contrast, we designed a novel approach based virtual surgeries, and simulated surgical rearrangements of the tendons of human subjects that contributed to force generation in the hand. We tested the prediction that in a truly modular controller it must be harder to adapt to surgeries that are incompatible with the synergies. Our results provide direct evidence that muscle synergies are key elements of a modular architecture underlying motor control and adaptation.