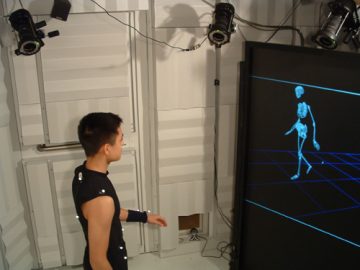 The HAVEN was a facility for multisensory modeling and simulation, developed at Rutgers University by Prof. Pai to support multisensory human interaction in an immersive virtual environment.

The HAVEN is a densely-sensed environment. As human interact in the HAVEN, their position, motion, applied forces, and appearance, (as well as the readings from hand-held tools), can be simultaneously measured using a multitude of sensors located on the walls, the ceiling, the floor, and even attached to the subject’s hand. Sensors include a Vicon motion capture system, a ceiling-mounted stereo-vision system, a specially modified pressure-sensor with 10 thousand capacitative tactels for measuring the position and pressure of a person’s footsteps, a microphone array, and several force sensors.

As well as being densely-sensed, the HAVEN was designed to be a rich multisensory display environment. For visual display, the chamber contains a rear-projection screen sufficiently large to display human-sized avatars. Projectors located above the ceiling treat the table-top (or the floor) as a front-projection display. Polarized filters on the projectors and worn by users allow interactive stereo visualization of 3-D objects and environments. Haptic interaction included both a PHANToM haptic device and passive haptics.

The chamber is acoustically insulated with an array of loudspeakers for spatialized auditory display.