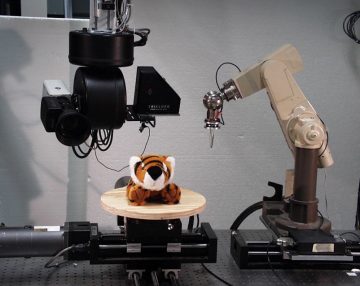 Starting around 1998, we developed the UBC ACtive MEasurement facility (ACME), a telerobotic system for capturing comprehensive computer models of physical interaction behavior of real 3D objects. The behaviors we could successfully scan and model include deformation response, contact textures for interaction with force-feedback, and contact sounds. We also developed a novel software architecture for telerobotic control. ACME could acquire models of soft deformable objects, like a stuffed toy tiger, as well as models of hard objects, like a clay pot, which have significant contact textures and sounds. This influential system showed that it is possible to automatically acquire models for multisensory interaction with virtual objects, with visual, haptic, and auditory feedback, for applications in games, animation, and e-commerce.

More details are available in the following papers: